Situated off Yemen’s west coast in the Red Sea, the FSO SAFER is a floating oil terminal with a current cargo of over one million barrels of oil. Since the outbreak of the Yemeni civil war in 2015, the SAFER has been left unmaintained and has fallen into a state of disrepair.

There are growing concerns in the international community that the vessel is at risk of releasing its cargo: either from oil leaking into the waters or an explosion/fire on board leading to the release of particulate pollution. Such a release would have a catastrophic impact on the vulnerable ecosystems and infrastructure surrounding the SAFER, as well as local populations, many of whom rely on the waters of the Red Sea for their livelihoods.

In 2019, Riskaware conducted investigations into the threat posed by the FSO Safer to the people of Yemen and the surrounding countries on behalf of the UK’s Department for International Development (DFID), now the Foreign, Commonwealth & Development Office (FCDO).

Working with two non-profits, ACAPS and the Satellite Applications Catapult, we assessed the impact from worst case scenarios from an oil spill or fire onboard the vessel. The results of these investigations were vital in raising awareness of the sheer scale of the environmental and humanitarian risk posed by the FSO Safer, being referenced at UN and US government meetings, as well in the media including Time Magazine, the New Yorker and on NBC.

Click here to read our article on the original investigations.

Since the initial investigations, the UN and other parties have continued their work to resolve the situation. However, a solution is yet to be found. Meanwhile, with only a skeleton crew to maintain it and no power from its steam boilers, the state of the vessel has been deteriorating over time. This was illustrated by a serious incident occurring on May 27, 2020, where divers were required to perform emergency repairs to a cracked pipe leaking seawater into the engine room.

Considering this event, and the vessel’s continually worsening state, it is prudent to prepare for the occurrence of a further incident on the FSO Safer.

In January 2021, the FCDO once again asked Riskaware, ACAPS and the Satellite Applications Catapult to help. This time the focus was to investigate the impacts of three scenarios, identified by shipping experts at the International Maritime Organisation (IMO) as the most likely to occur.

Scenario 1: Heavy wear or corrosion of the bottom steel resulting in the loss of half of one of the vessel’s storage tanks

Scenario 3: Release from three tanks caused by fire/explosion or cracking of the hull over two days

The diagrams below provide a comparison of the three scenarios and their magnitude, ranging from a relatively small-scale oil spill from the PLEM structure in Scenario 2, to the more severe and far-reaching impacts of losing 3 tanks of oil to the sea or fire in Scenario 3. 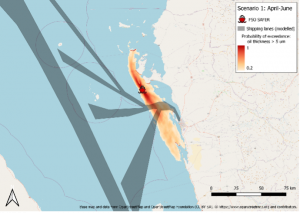 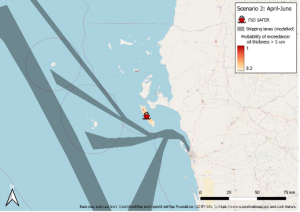 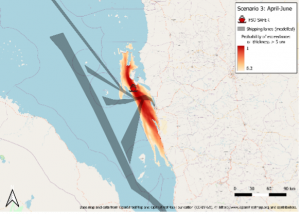 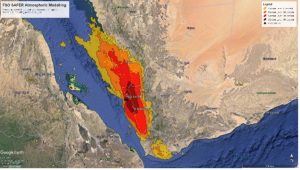 These models were generated using stochastic modelling and represent the probability of a certain threshold of oil or smoke being exceeded. Thousands of model outputs were combined to identify the areas that oil from a spill or smoke from a fire could most likely reach.

FACT: To ensure that a representative sample of the historical meteorological and metocean datasets were used approximately 2,000 model runs were completed for each scenario using hourly metocean data (currents, wind, sea temperature and sea state) from the last 4 years. Riskaware’s servers completed 10,000s of CPU hours and more than 10 Terabytes of raw data to produce these results.

The outcomes of an incident in this area could vary drastically based on the season. In the summer months, the prevailing currents and winds in the Red Sea travel south towards the Mouth of Aden, and in the winter months this trend is reversed. This trend is so strong in fact that the mean sea level in the Red Sea in winter is 0.5 metres higher than in summer. As a result, it’s important to analyse and treat the data from each season separately.

The seasonal effects on an oil spill are very clear in these probability outputs for Scenario 1: 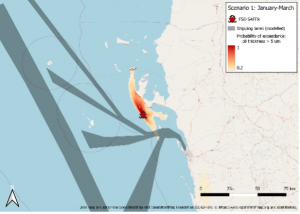 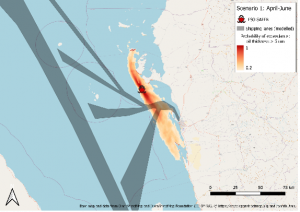 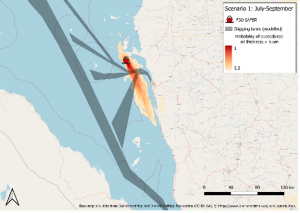 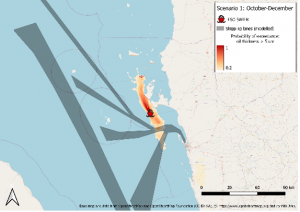 As well looking at the additional scenarios, in this most recent investigation our team produced several additional outputs to help prepare for any forthcoming incidents on the FSO Safer. Stochastic modelling, such as that completed for the investigation, allowed us to produce several other important output results. Below are some examples produced for the report for Scenario 1 in the months of April to June 2022:

Earliest arrival time – Highlights how much time would be available to respond to an incident. The darker areas on the map show the regions that would be affected first by oil from a spill. 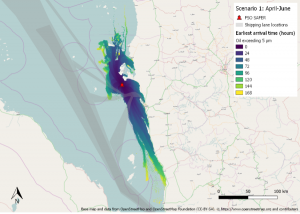 Maximum thickness of oil – Indicates the highest concentration of oil on the surface of the water which can be useful for planning response strategies, such as the deployment of booms, skimmers and dispersants. 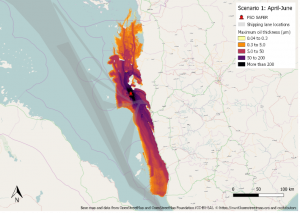 Asset impact – As well as looking at the regions affected, our team looked at the probability of specific assets being affected by a particular scenario, such as desalination plants or fishing ports. In the chart below, we analysed the probability over time of the main shipping routes around the FSO Safer being affected by the spill for Scenario 3 between July and September: 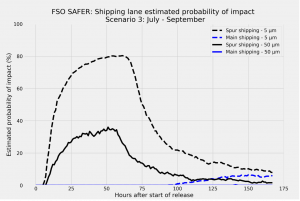 The blue lines show the same thresholds as the black lines, but for the main shipping route from the Mouth or Aden to the Suez Canal. In this scenario the probability of this route being affected is much lower, but still possible after a few days.

That being said, the crisis caused by the Ever Given tanker blocking the Suez Canal highlights how any blockage to this route would have very serious global consequences.

Reports such as the one we produced for the FCDO are important in understanding and preparing for incidents like an oil spill or fire from the FSO Safer. However, if an event was to occur, predictions will be required based on the latest forecasts for the specific time of the incident and this is why Riskaware have made our MarineAware Operations platform available to the FCDO and IMO.

MarineAware Operations is designed to help prepare for the evolving risks from known threats by providing daily updated simulation over the current and following day. Simulations are generated automatically for defined scenarios such as those set out by the IMO and the results made available through the MarineAware Operations web app. The app also provides the latest optical and radar imagery from the Sentinel satellite constellations to help monitor the areas around the vessel. 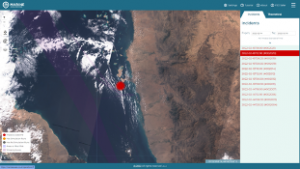 Figure 1 – Viewing the satellite imagery and selecting a release time 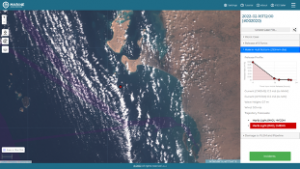 Figure 2 – Selecting a scenario and simulation 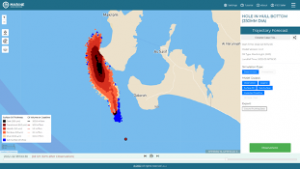 Preparing for the worst-case scenario

In all of the modelling analysis we have conducted as part of our investigations, and the simulations provided by MarineAware Operations every day, the overarching conclusion is that a fire or oil spill from the FSO Safer would be disastrous for the environment, the people of Yemen and the surrounding countries. As part of their humanitarian analysis for this investigation, ACAPS estimate that the clean-up of an oil spill from the FSO Safer alone could cost twenty billion dollars, with millions of people’s lives and livelihoods impacted.

We continue to hope for a resolution to the problem before it is too late. However, should the worst happen our investigation and incident support through MarineAware Operations will ensure that we are prepared.